I. Proof of Concept

In order to test our system, we initially ran a proof of concept experiment. Our DNA probes were first ligated with T4 ligase,  then incubated with and without miRNA (1e-8M), and then amplified using phi29 rolling circle amplification. SYBR gold dye was used to detect the DNA present, and this fluorescence reading was compared between the two samples to determine whether amplification occurred. The results show an increase in fluorescent signal in the miRNA containing , compared to the no miRNA control. This finding suggests that phi29 amplified DNA in the miRNA-containing experiment but not in the control experiment, which is indicative of a conformational change in the DNA in response to miRNA binding, as was expected. The experiment provided preliminary evidence suggesting the concept of our experiment was successful, but further optimization was needed to confirm the findings and optimize the procedure. 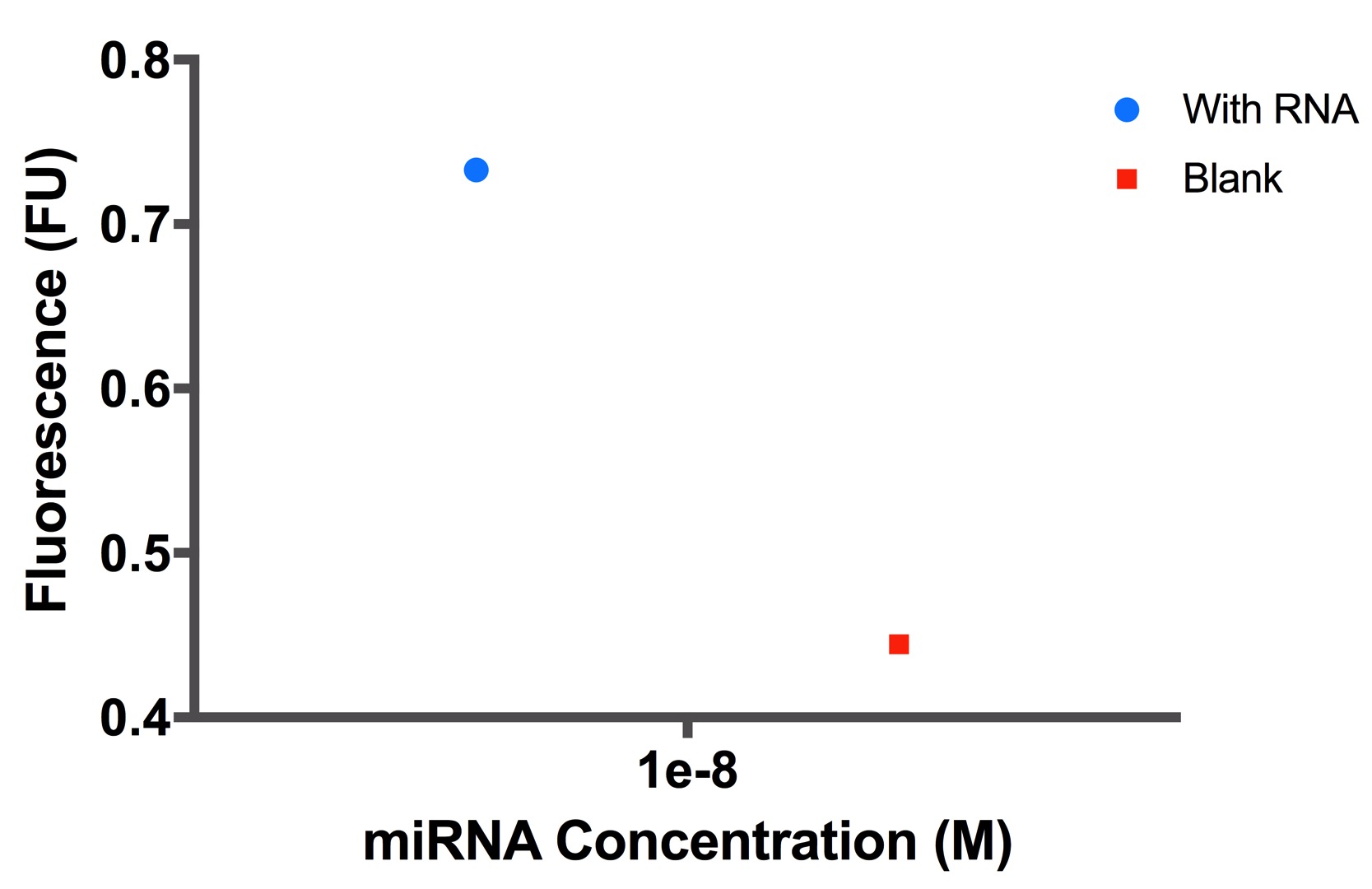 Figure 1. fluorescence results for our proof of concept run.

While the results from the proof of concept were promising, the ligation and the formation of the circular strand was still needed further verification. As a result, DNA strands developed through iterations 1 and iteration 3 were ligated using Circligase and T4 respectively. The Circligase condition served as a control in order to observe how circularization would behave in a gel.

The Circligase control has two bands. This is due to the impurities present in the sample. The lower band in both cases corresponds better with its designed size.The Circligase bands both move up after being ligated. This is because circular strands move slower in the gel versus normal strands. A very similar movement is observed for the T4 ligated strand. The higher position of the ligated strand and its similarity to the Circligase verify our circularization protocol using T4.

This verification is extremely important, as it shows that we have achieved our third goal (developing a cheap method to circularize our strands) and we are one step closer to an assay that could potentially end up being commercialized. 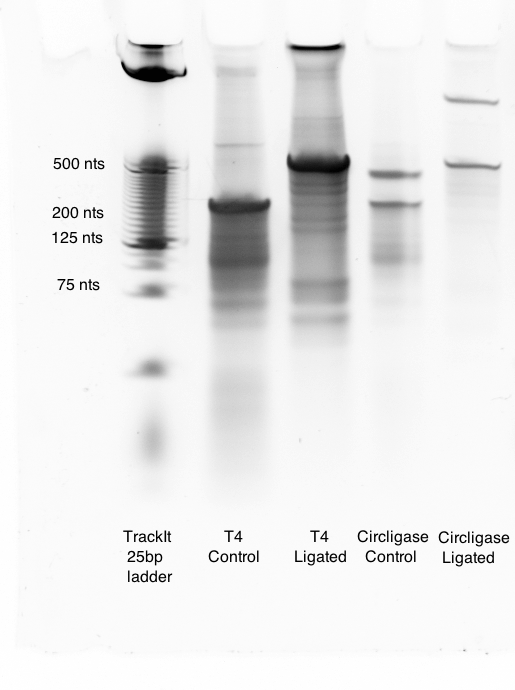 Figure 2. Polyacrylamide Gel Electrophoresis (PAGE) results showing verification of DNA circularization. The ladder is not well resolved due to loading issues and higher than optimized voltage being used for this test. The T4 control DNA seems to have a lot of impurities. This is because when ordering the DNA, no purification was requested from IDT. This was changed for future experiments, where RNAase free-HPLC was used to purify the DNA received.

The DNA probe delivered from IDT was in its linear form. Even though the non-circularized probe is still capable of forming the desired dogbone structure, the nick present in the oligomer hampers rolling circle amplification by hindering elongation of DNA amplicon mediated by phi29 DNA polymerase. For this reason, we circularized the linear oligomer using T4 DNA ligase. In order to select the optimal circularization condition, T4 ligase was incubated with DNA for different lengths of time, and the ligation was verified using a polyacrylamide gel (Figure 3). The DNA probe is 100 nucleotides long, and this is verified in Figure 3 as the lower darkest bands.

Successful ligation was demonstrated as a shift in size from unligated DNA. Circular DNA travels slower through polyacrylamide gel and hence appears as bands higher than those of unligated linear DNA. Urea was included in polyacrylamide gels to ensure elimination of secondary DNA structures.

Since all points resulted in comparable ligation efficiency, shown as visibly identical intensities of ligation bands across the three conditions, all ensuing experiments involving probe DNA ligation employed 10 minute T4 ligase incubation for its ease. However, longer ligation duration does appear to increase the amount of DNA ligated, as fainter unligated (lower) bands were observed in 2 hour and overnight ligation lanes than that of the 10-minute lane (Figure 3), suggesting consumption of more linear DNA. Potential future improvements for T4 ligation could be explored. We suggest altering ligation buffer conditions, such as salt concentration to further optimize ligation efficiency. In addition, since T4 ligase relies on hydrolysis of ATP into AMP (adenosine monophosphate) and pyrophosphate, pyrophosphatase (an enzyme that catalyzes hydrolysis of pyrophosphate into two phosphate ions) could be utilized during ligation for timely removal of pyrophosphate, which would further product yield, facilitate forward ligation reaction and ultimately enhance ligation efficiency. Finally, a lower concentration of DNA in the ligation mixture could be tested as well. 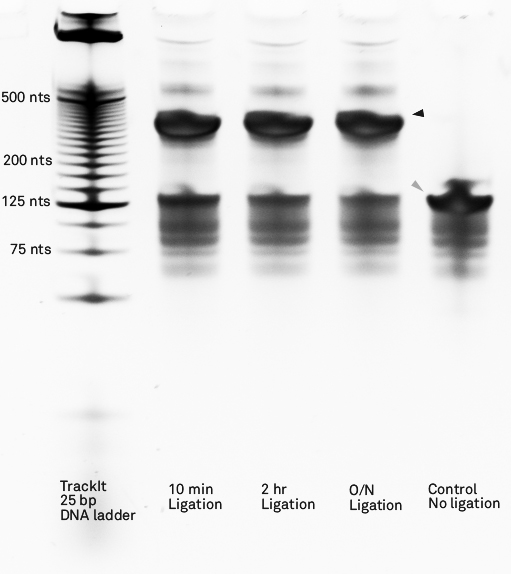 Molecular beacons were postulated to be a good fit for our design, as their complementary design to segments of the amplified DNA would allow for easy fluorescent quantification. Molecular beacons in our assays were purchased from IDT ($660 for 1580 samples ). They consist of a stem-loop structure with one end attached to a fluorophore (5′ 6 FAM) and the opposite end attached to a quencher molecule (3′ IOWA BLACK FQ). When the stem-loop structure is closed, the fluorophore is in contact with and quenched by the quencher molecule, and fluorescence is inhibited. However, when the stem-loop opens up upon binding to the amplified DNA oligomers, the quencher and fluorophore are no longer in contact and thus allows for the detection of fluorescence. On the other hand, SYBR Gold (ThermoScientific; $120 for 50,000 samples) is a fluorescent nucleic acid intercalator (cyanine dye) that stains and allows fluorescence detection of ssDNA, dsDNA, and RNA with signal enhancement of greater than 1000 fold. Our design initially chose to use molecular beacons for quantification due to their extreme specificity to our design which we thought would lead to better quantification than a general nucleic stain. 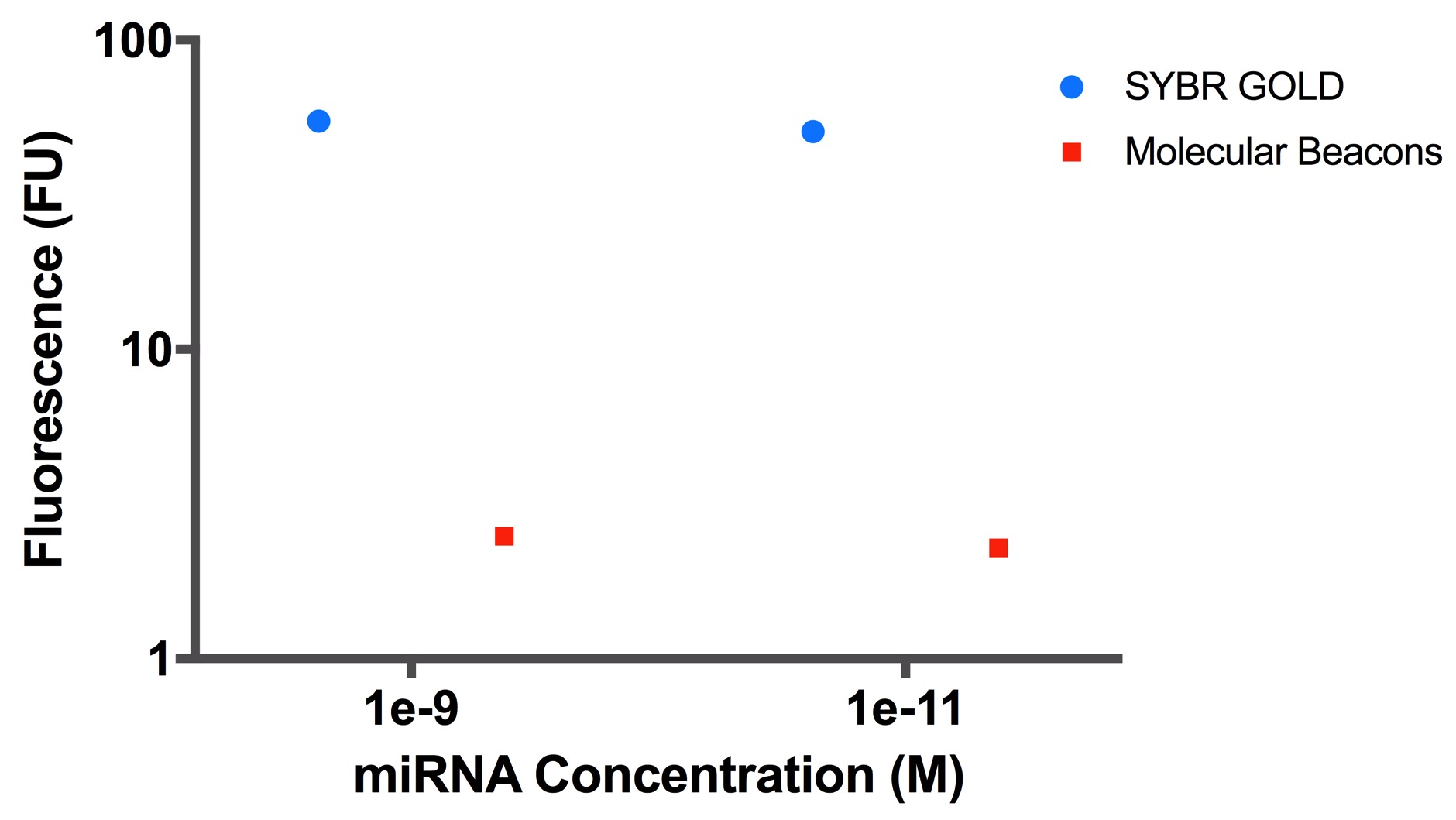 As indicated by Figure 4, SYBR gold provided a much stronger signal than the molecular beacons. This is expected as the molecular beacons only bind selectively to sites on DNA amplicons that contain complementary sequences, whereas SYBR gold stain indiscriminately intercalates DNA bases and introduces a much higher binding efficiency. The low concentration of molecular beacon utilized in the assay could also be a contributing factor to its limited signals. Since applying a higher concentration of molecular beacons would be very costly and would deviate from our goal of designing an inexpensive assay, we decided to modify our design by selecting SYBR gold as the rapid and inexpensive DNA amplicon detection method.

After the miRNA has been detected by the structure, phi29 is added to amplify the signal. This enzyme greatly increases the amount of DNA available if the dog bone has opened. The excess DNA generated is an extremely long single strand, which causes many different problems in the detection process, since the DNA is clumped together and significantly harder to detect. Along with this, the heterogeneity of the samples in much less quantitative and reliable results.

In the experiment performed, the amplification efficiency in the restriction enzyme buffer was also tested to ensure it is not negatively affecting amplification.

Because of the results of this experiment addition of restriction enzymes to our samples became one of the pillars of our design. Their presence improves the quality of the results considerably. 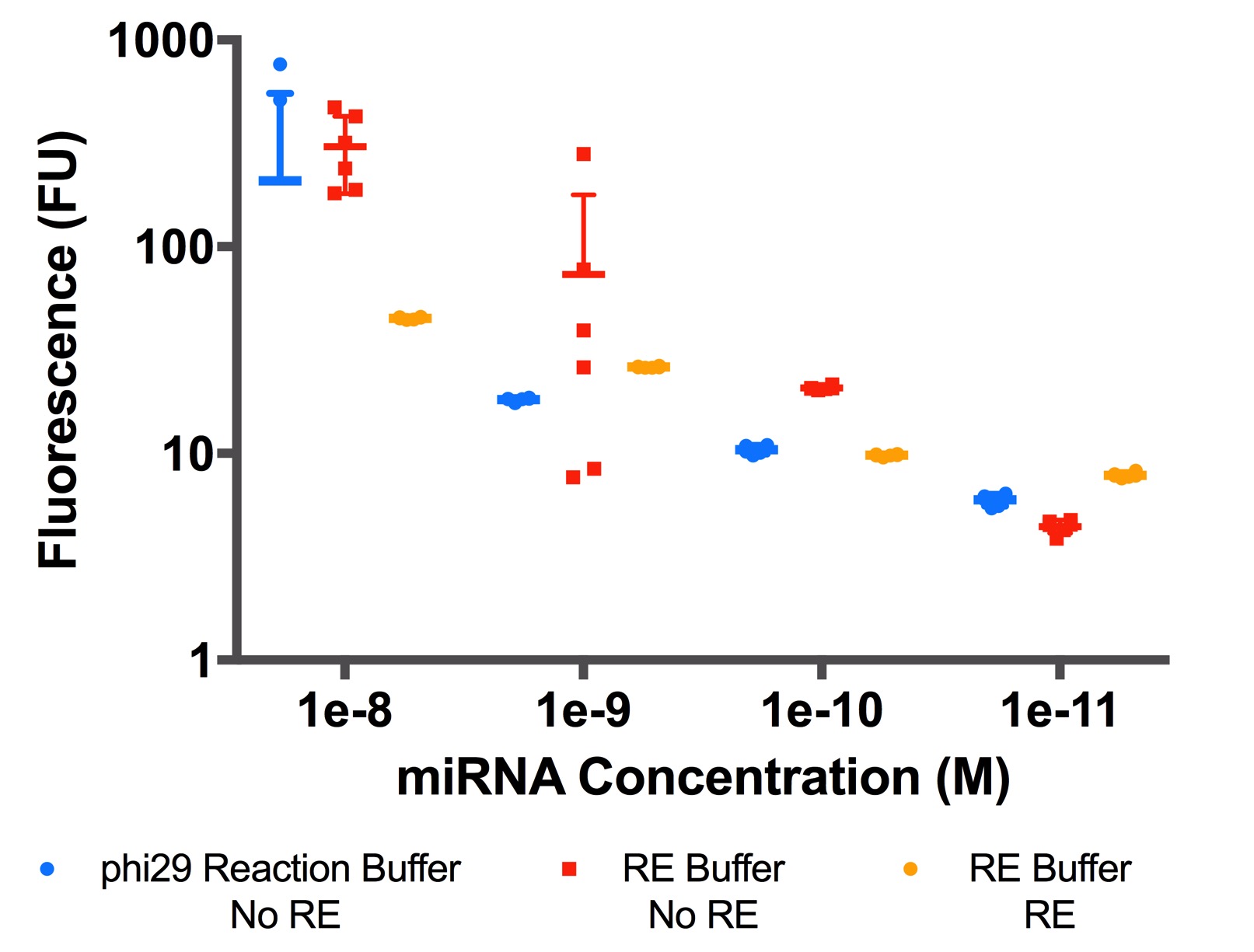 Figure 5. Fluorescence between phi29 reaction buffer and no restriction enzyme, RE buffer with no RE, and RE buffer with RE at various miRNA concentrations. Each data point corresponds to a separate measurement from the same well. 6 measurements were taken from each condition’s well.

The faulty miRNA only produces a small amount of signal at 1e-8 but at other concentrations, its signal is almost 0. The strong difference in the signal proves that our probes are able to differentiate between miRNAs that are separated by 3 nucleotides. This means our probes are highly specific and can be relied upon to only detect the miRNA signals they were designed for.

Through this we effectively reached one of our project goals, goal number 5. Although to further verify the selectivity of this , we must also test the signal it would produce when the miRNA in question is different by only one nucleotide. 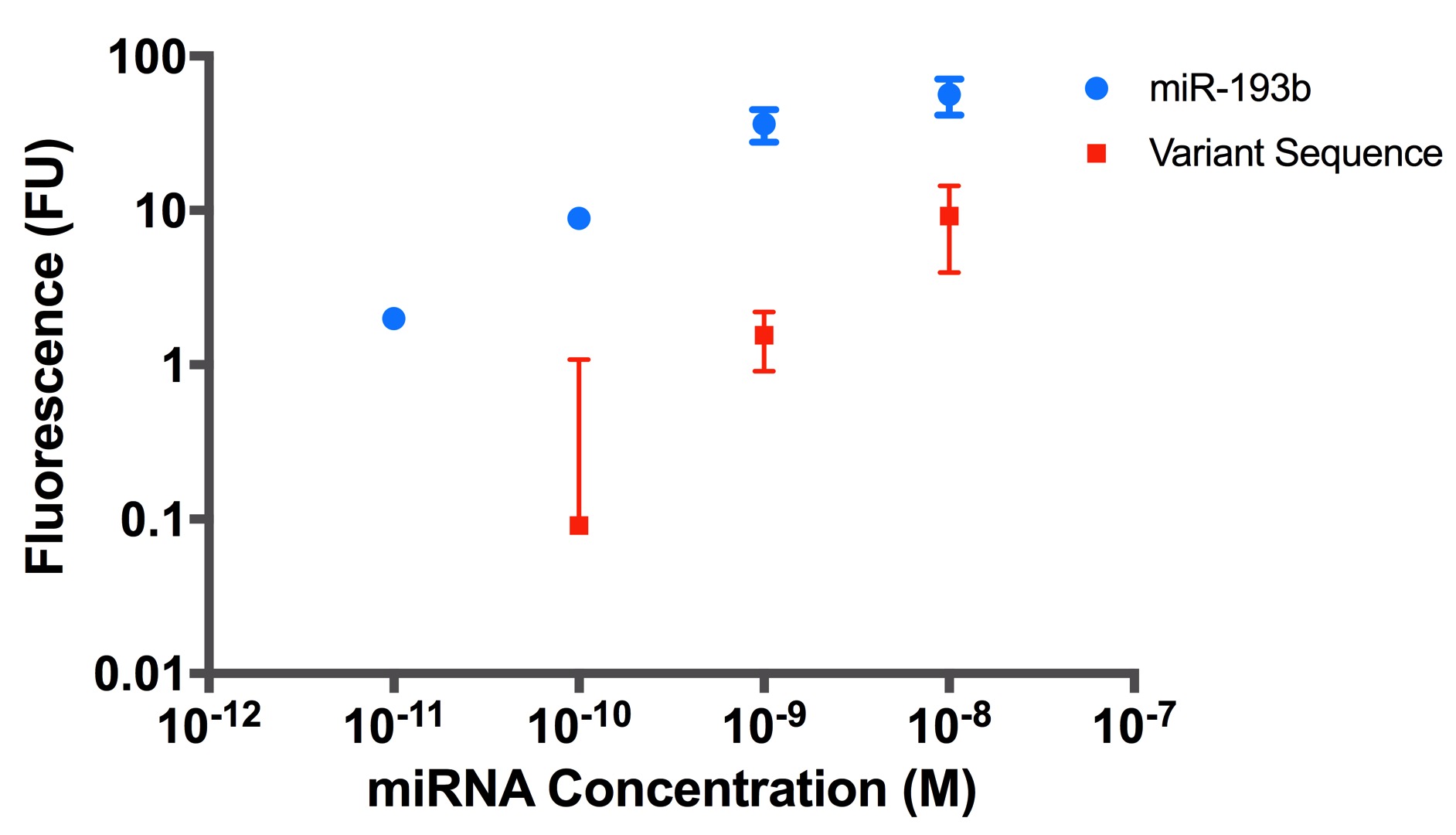 Figure 6. Fluorescence results for the variant miRNA strand versus the results for miR-193b. Replicates were used for each condition and the error bars show standard deviation. The results for 10e-11 M are not shown because they were zero.

As a proof of concept, we tested our assay on whole blood to determine the potential of our system in its real-life application. Since there is of in blood serum (and in the PBS used to dilute the serum), we expected decent results for miRNA concentrations of 1*10-8 and 1*10-9, but we expected and less results for lower concentrations in the serum. Our results at 1*10-9 agree with a fluorescence of 1011 and showed positive results for miRNA detection; this meant that the miRNA was detectable by our dog bone system at that level of concentration in the blood. The fluorescence of our serum was less than the one without serum; this may be because the serum did undergo ultracentrifugation and may have had other remaining contaminants that interfered with our reaction.

This experiment was a good proof of concept in terms of miRNA detection at relatively higher miRNA concentrations; however, there is a way to go before we can actually apply our assay to blood since miR-193b is found in the blood at around 1*10^-12 M. Further repetitions are needed to determine statistical significance and improvements on serum purification must be done to obtain more viable results. 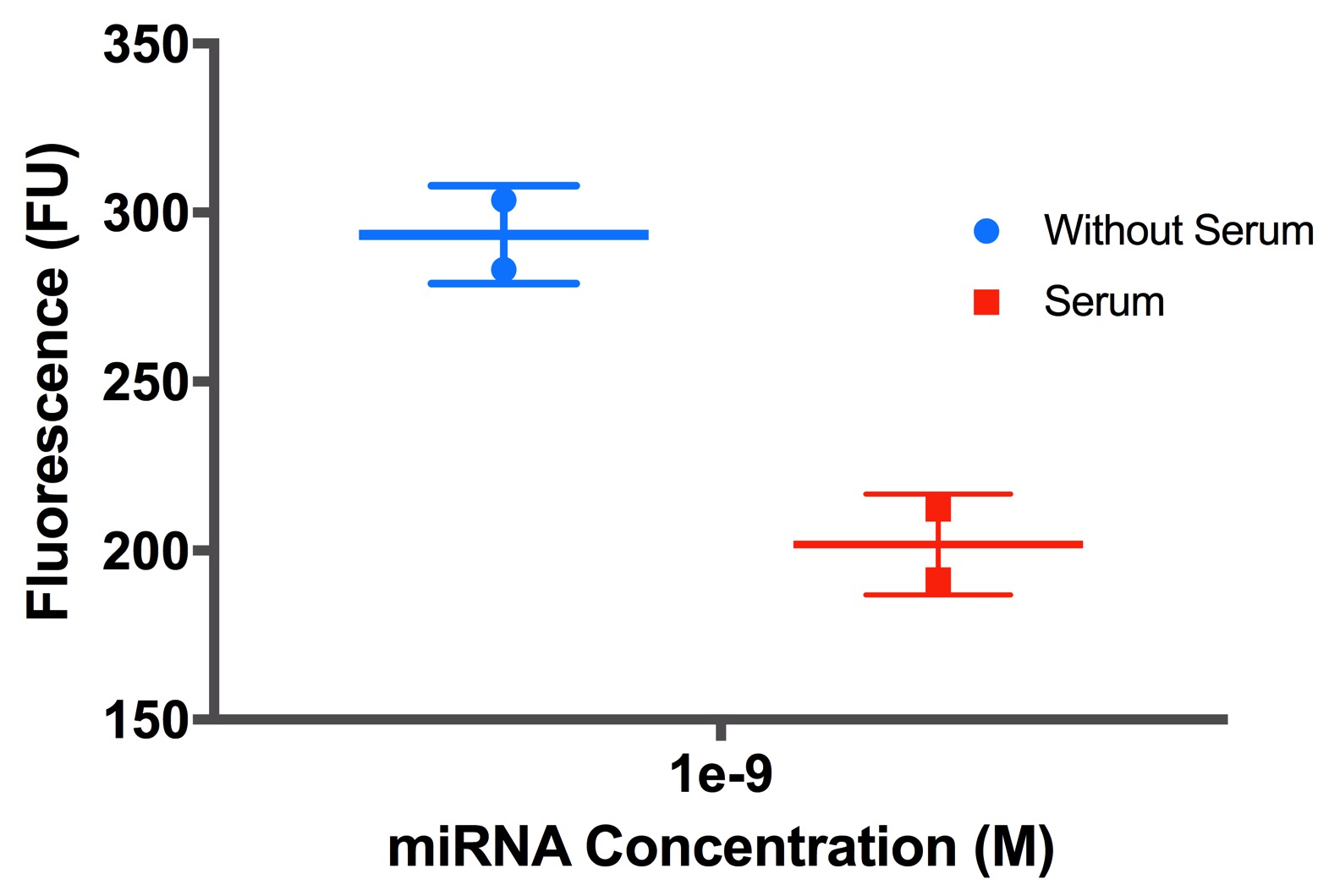 Figure 7. miRNA concentration in molarity vs fluorescence in FU, comparing serum levels (red) with levels in solution without serum (blue) at a concentration of 1*10^-9 M.

The aim of this run was to retry our assay with different conditions that were thought to have positive effects on our sensitivity. The concentrations for dNTP and phi29 were both increased for this test (without increasing the actual quantity added to keep costs low). In addition, the ligation of DNA was conducted with a higher concentration of salt in its buffer. This is in our simulations, the non-circularized DNA was more stable with a higher concentration of salt.

As shown in Figure 8, we are able to detect miRNA at concentrations as low as 10^-12 M. The top portion of the figure shows saturation at 10^-8 M. This could be a sign of phi29 becoming limiting in our solutions, as it is not amplifying the DNA-RNA complexes more than the lower miRNA conditions.

Overall, this experiment verified our variation of protocol further and it increased our sensitivity by 10 fold. This increase is substantial because the reported concentrations of miRNA-193b are around 10^-12 M and 10^-11 M. 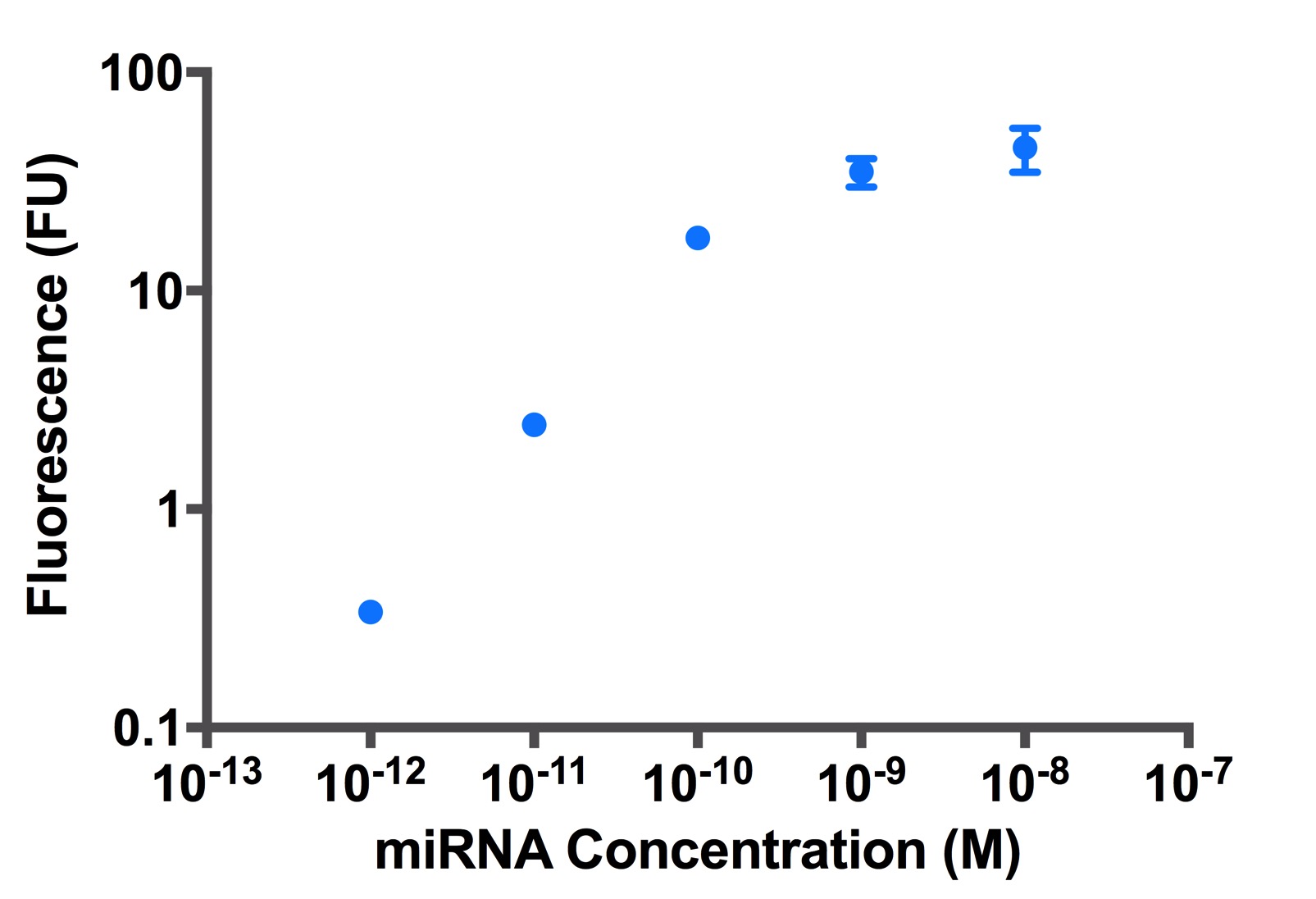 Figure 8.  values for each miRNA concentration. All samples were ran in triplicates and the error shown is the standard deviation.

A highly sensitive, selective, and inexpensive assay capable of producing signals at a concentration of 10^-12 M was successfully designed. The assay has proven to be highly quantitative through the addition of restriction enzymes, and tremendously specific through the complementary DNA-RNA binding. It is relatively inexpensive through the individual components. Complicated lab equipment is not required to run the assay as the only machinery necessary is a fluorometer which is found in most standard labs. The design itself is also modular as individual components have the capacity to be changed and re-designed for any miRNA. In addition, our assay has been shown to be able to work properly in serum samples. Our assay has huge potential to the entire cancer diagnosis process in our current medical landscape. 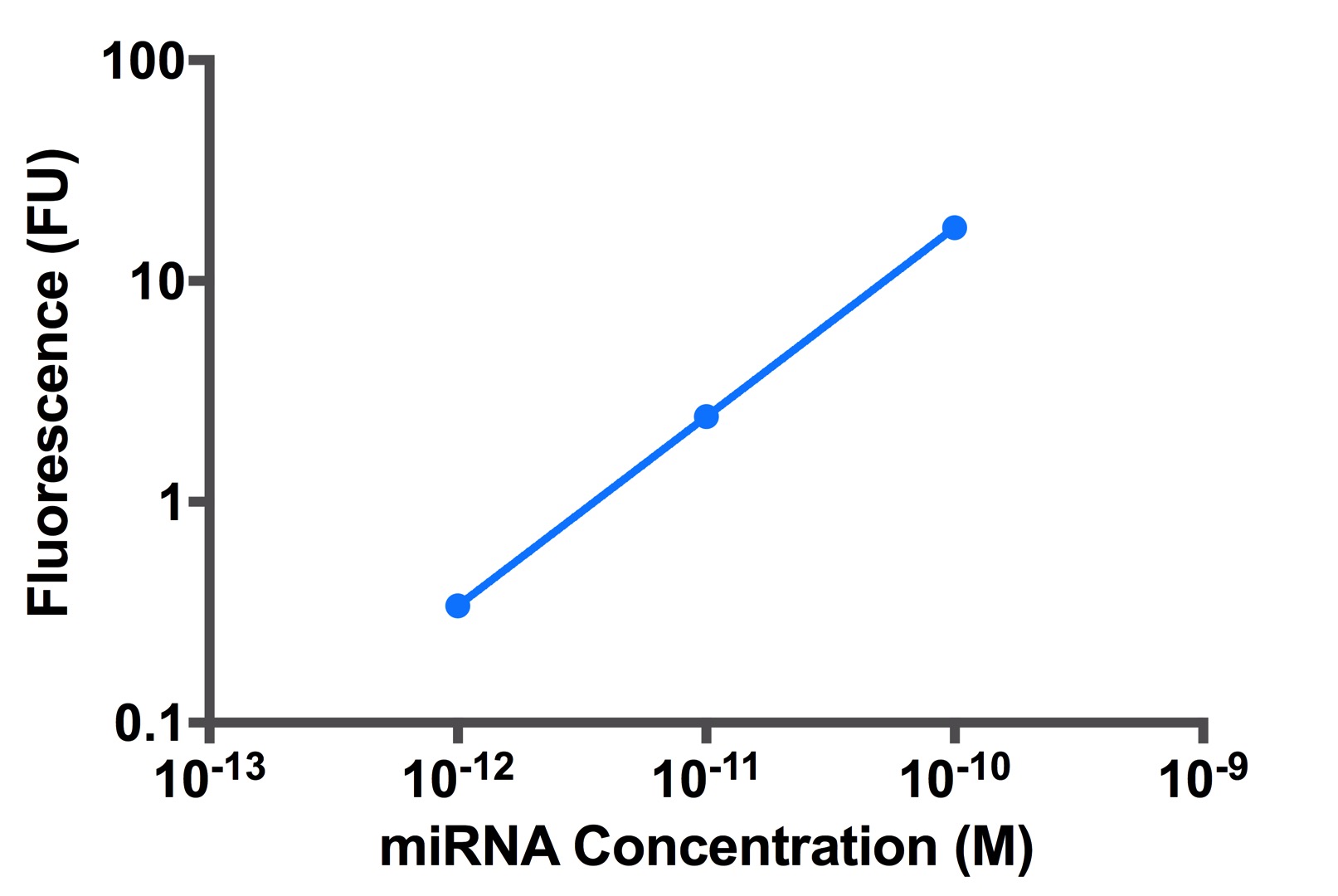 Figure 9. In our experiments, as miRNA concentration in the blood increased, the fluorescence from SYBR gold also increased in a linear fashion. The data for this graph is from the final experiment. The R^2 value is 1 for the fit.